This is always an entertaining race at Felpham Sailing Club and the 2019 edition didn’t disappoint.

A novel race, where the helm (or crew) have to start on the promenade and run to their boat on the sound of the horn.

There are a few unusual rules to be followed, which, as always, are broken …usually by the same culprits:
It was clearly defined on the notice board this year that boats were only allowed to be held in the water up to a pre-defined depth. (The knee caps of a dedicated duty person: James Rennie).

Paul Miller was clearly standing out of this zone, holding Jack Miller’s Aero 7.

Jack Miller had the best start.

Callum Aldous & Abi Bentley (RS 200) had the worse start. It all looked good until the boom pointed to the sky and the boat toppled over at pace….much laughter was heard from the clubhouse balcony.

Richard Bentley(Aero 7) politely followed them, just not quite as dramatically.

The race to the windward mark was on… Jack Miller was being chased by the Lark (Martin Gillam & Connor Gillam) and the DZero of Mark Aldous was close behind.

By the third mark, Jack had pulled out a considerable lead which was to prove unassailable.

The Dzero went out to sea while the chasing Aero 5s (Catherine Hemsley & Roshan Verghese) and the Aero7s (Richard Bentley & Chris Whitney) headed in shore. The Aeros overhauled the DZero at the windward mark.
The DZero (Mark Aldous) worked hard to make up the lost ground on the Aeros only for his halyard to fail – the DZero sail came crashing down back to earth/water…the race was over for him. 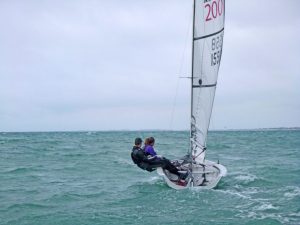 Mia Gray (Tera) persevered through the demanding wind & waves & despite a nasty knock managed to finish…as did Josh James in the Topper.

This years’ Presidents Prize goes to Jack Miller in the Aero7, by a Fisherman’s Mile (if there were a such a thing).

The afternoon race was a pursuit race & only attracted 3 boats; an Aero 5 (Catherine Hemsley), an Aero 7 (Richard Bentley) and an RS 200 (Callum Aldous & Abi Bentley.)

The Aero 5 had a 2minute 49 seconds head start over the Aero 7, the RS 200 started a further minute behind the Aero 7.

….and that’s the way they stayed .If anything, the Aero 5 increased its lead! 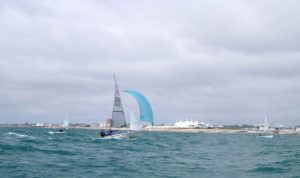 3 races were scheduled back to back, with 1 discard, for the prestigious Commodore’s Cup.

The wind was forecast to shift from the NW to the SW at some point in the day, so the Race Officer set 2 courses; Race 1 would be a windward/leeward course & races 2 & 3 a Triangle.

We started the day with a F4 gusting F5 and ended with F5 gusting F6. 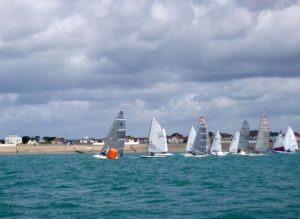 Ross Fisher (Blaze) & Paul Miller (Phantom) lead the way on the first race. Further down the fleet were the Aero 5s of Catherine Hemsley & Roshan Verghese along with the Laser Radials of Chris Bull & Tom Twist.

After 40ish  minutes of sailing, the handicaps were applied, the Blaze & the Aero 5 (Catherine Hemsley) were joint first, followed by the 2 radials.

The second race was similar in that the Phantom & Blaze disappeared in to the distance. This time the Phantom capsized on the last  leg & fell back in the results. Once again, the two Aero 5s & the Laser Radials were ever present. Catherine Hemsley (Aero 5) took the win followed by Chris Bull (radial), Roshan Verghese (Aero 5) & Tom Twist (Radial).

It was during the second race that the wind moved to the SW & increased…as did the waves.

There were only 5 starters for the final race of the day.

The Supernova (James Gerwat) was first round the windward mark and took off towards the next mark with a nice lead on the water. However, the gybe had proved demanding all morning for the helm, and  yet again he turned the Supernova upside down. The RS 200 (Richard Bentley & Abi Bentley) kindly put in a sympathy capsize. The Aero 5 of Roshan Verghese stormed to the front and led the way.

The Supernova was upright quickly and overhauled the Aero 5 on the next beat…..only to capsize again at the gybe mark. And so the pattern continued on each lap until both Aero 5s (Roshan Verghese & Catherine Hemsley) went off in to the lead. 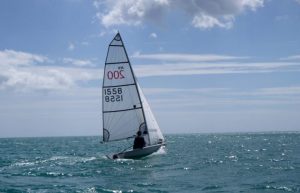 So this final race was won by Roshan Verghese, followed by Catherine Hemsley, both Aero 5s.

In summary, the bank holiday weekend belonged to Catherine Hemsley for won the Tyger Trophy on Sunday & the Commodore’s Cup on Monday.