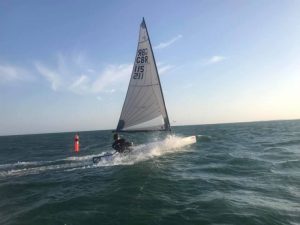 Photos by Sam May

Race 9 of the Capstan Series at Felpham Sailing Club was sailed in a F5 gusting F6 breeze,  with the wind from the North East….

7 boats took to the water, but only 4 finished.

The RS600, helmed by Tim Cutsforth was clearly a bit of an animal in these conditions.  Tim did his best to disrupt the rest of the fleet by drifting upside down on the start line before deciding to head back to the FSC bar. Mark Aldous, in his DZero was getting ready for the reaching start (what was the Race Officer thinking of?) but his kicker strop decided it had had enough. Apparently he couldn’t sail it without a kicker.

So the 5 remaining boats headed off to the first mark & the first gybe (of many) of the evening. 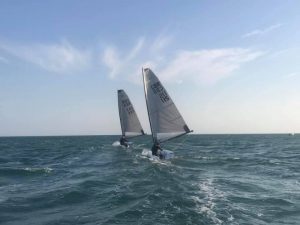 James managed to gybe with the main sheet wrapped around his tiller extension which resulted in an impressive 180…he was now facing the other 4 boats as they were all trying to execute their own gybes. Callum capsized, which was to be his first of many. The Aeros took the lead on the water, followed by the Blaze. 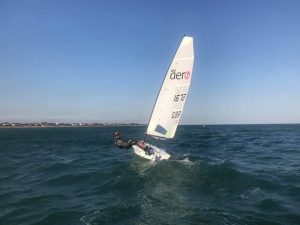 The 2 DZeros gathered themselves together & set off in pursuit!

Richard Ganley’s Blaze came to a swift end at the next gybe and the Aero of Jack Miller had a couple of issues which set him back. Meanwhile, the Dzero of James Gerwat decided to try and avoid the next gybe by sailing by the Lee, straight to the next mark. He nearly made it, but most importantly, he managed to stay upright & went round the mark with Jack Miller. Callum Aldous was still close behind & Richard Bentley, in his Aero, was out in front.

Callum & Jack dropped back on the next beat & James followed Richard around for another lap, a little closer to him this time. However, Richard went to the wrong mark, dragging James with him.
Jack Miller took the lead with Callum on his transom. 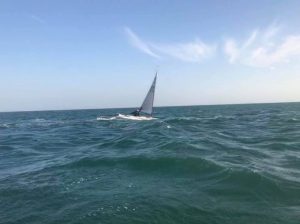 From this point on a familiar pattern developed, the 2 Aeros remained at the front, swapping places every now & then.

Callum would catch James up, capsize & then James would disappear ahead again only for Callum to catch him up again…..and capsize. 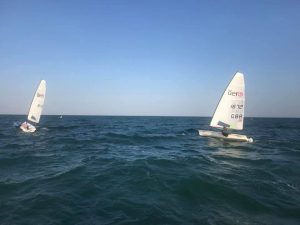 When the music stopped, first boat on the water was Jack Miller, followed by Richard Bentley, James Gerwat & Callum Aldous. 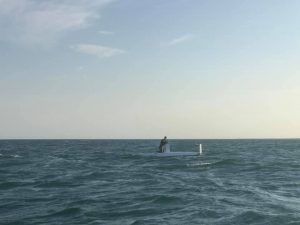