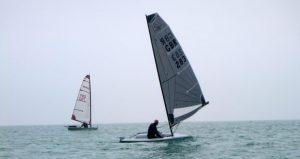 The popular Aries Series continued at Felpham Sailing Club  on Sunday 19th May with races 7 & 8 scheduled to start at 11:00 & 12:00 respectively.

The forecast proved accurate with a disappointing F2 from the North East.
A Trapezoid course was set, close to the beach, as the tide was still flooding in….this guaranteed a shifty beat producing  a game of “snakes & ladders” for our 14 competitors. ( A reduced fleet, due to some members deciding to compete in the Bognor 10k)

Peter Jones ( Blaze) & Andrew Billington (Supernova) got the best starts at the pin end, with the other Blaze (Ross Fisher) opting to start on port.  The DZero (James Gerwat) decided to follow Ross on port. The rest of the fleet were slow to cross the start line as the wind shifted…and so the race to the windward mark was between the 2 Blazes, a Supernova & a DZero.

Peter Jones was first round followed by the DZero and then the other Blaze. The Supernova was still in touch.

The lack of wind on the downwind leg worked against the heavier Blazes & the DZero  took advantage to lead on the water. And that’s how it stayed at the front – the Blazes did swap positions now and again and the Supernova was ever present.

There was a delay to the start of the second race as the Race Officer waited for the wind (what there was of it) to settle down – it was due to turn in  to more of a Southerly, but it couldn’t make up it’s mind.

So this time we had a long line, right back to the clubhouse. The main protagonists, Peter Jones, Ross Fisher, James Gerwat & Andrew Billington all headed inshore where there would be a much shorter distance to the windward mark.

Once again Peter Jones (Blaze) rounded the windward mark first, followed by Ross Fisher (Blaze), James Gerwat (DZero) & Andrew Billington (Supernova). At this point, all the other boats appeared to be stuck in the middle of the course. 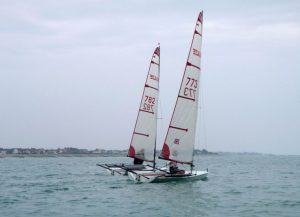 The 2 Blazes managed to get some space between themselves & the DZero which also managed to pull away from the Supernova.

And then we started the second lap. The wind shifted around, the Blazes tacked & tacked again…as did the DZero…only to find Andrew Billington in the Supervova, with a cool head, pop up in front at the windward mark to lead the way.

Unfortunately, Andrew then conspired to snatch defeat from the jaws of victory by promptly sailing to the wrong mark. By the time he heard our shouts, the short reach had, for him, become a long beat. The Blazes went past him & the DZero was back on his transom. 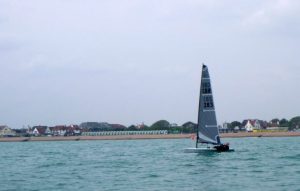 The next beat was equally as decisive. The Blaze of Ross Fisher had passed Peter Jones and was controlling the race from the front.
Both Blazes rounded the leeward mark & headed inshore. The DZero came round some 30 seconds behind but headed out to sea. By the time the 3 boats met at the windward mark, the DZero was ahead of Ross Fisher & close enough to Peter Jones to make small talk.
This was the 4th & final lap. All the DZero had to do was stay on the transom of the Blaze for another surprising victory.

Unfortunately the DZero was a little over excited & got too close to the Blaze, forgetting that when it rounded the mark all it’s scaffolding then follows it. The DZero had to sail a large circle around the Blaze to cross the finish line….4 seconds behind the Blaze on corrected time. 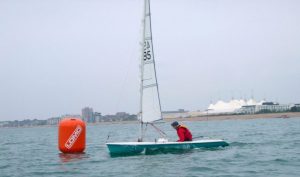 The 3rd Race of the day was Race 5 of the Viking Cup. The wind shifted to the South & picked up. The course was adjusted and all 9 boats got off the line cleanly.

As the wind was now constant & the beat short, the race was uneventful. The Dzero (James Gerwat) got a perfect start & lead around the windward mark from Peter Jones (Blaze), Ross Fisher (Blaze) & Andrew Billington (Supernova).

And that’s how it stayed. However, this time the Supernova managed to split the Blazes once handicaps were applied.

Full results are on results page