Below is a slightly biased account of the event supremely well organised by Pat Cullen on Saturday 13 September 2014:

They say it’s not the winning but the taking part that counts, and for most of the crews manning the many and varied examples on Saturday at Felpham, this was obviously the case ! Balance, flotation streamlining and general seaworthiness were foresworn in preference for fancy dress, ease of construction and in one particular case – carnage !!

This event, now in its second year, drew a crowd of dozens to the seafront outside the sailing Club. Many quite obviously relatives fearing for the safety of their loved ones, other simply waiting for the repeat of the demolition derby witnessed last year. Race Officer Bob May, in his usual unbiased way, laid down the race rules in the pre-match briefing, noting that his own sponsored craft, crewed by his son Sam plus Seb, Jack and Toby, were also taking part.

Organiser Pat Cullen with his team of highly trained athletes (the Late Comers), were naturally favourites to win, having spent literally minutes prepping their raft in readiness for the general pillaging only they know how to perform. A last minute entry by the Sailing Club (Strap it On), fresh from the Youth Regatta, made it to the start line just in time to win the ‘Least Likely to Finish’ award, whilst the sailing Club ladies, adorned with the floral regalia reminiscent of Hawaii 5 O needed assistance to carry their tub down the beach. 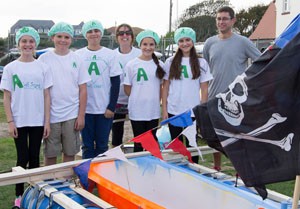 However, head and shoulders above the rest in terms of presentation were ‘Team Awesome’. This crew turned out winners in several categories – ‘Best Dressed’, ‘Best Decorated Bath Tub’, ‘Best Family Effort’, ‘Best Flag’, ‘Best Forget the Racing, we’ve Gone for Style’ and finally ‘Least Cheating’. All in all a tremendous effort by Winston and the kids !!

Back to the race itself. Complete confusion marked the countdown to the start with three crews launching into the surf a minute ahead of the gun (well, there were no guns, but metaphorically speaking!). A Race Officer’s warning duly issued the crews refocused for the start sequence. This time, perfection. All tubs headed for the first mark, that is all but for the Strap it On crew who seemed to favour the upside down approach.

First to the mark were the Late Comers, closely followed by the May’s crew. The Leg Shaver’s from the Pink Pub Bicycle Club, were next to round with the ladies in Flower Power, hot on their tails. Sitting pretty towards the back of the fleet, Team Awesome serenely paddled their way steadily onward, keeping their shower caps dry and their Jolly Roger flying in the breeze.

Approaching the second mark, team May’s started to overhaul The Late Comers and got their noses in front only to be thwarted by a ramming manoeuvre at the mark. The Strap it On crew were now swimming their way along the course having jettisoned the bath tub, towing their oil drums behind, providing another obstacle for the contenders. The Leg Shaver’s found themselves in competition with the ladies on Flower Power – whilst Team Awesome sailed serenely on.

With the end in sight, the two leading crews were neck and neck, egg missiles trading places with buckets of water. Boarding attempts and sabotage thwarted by Team Mays, but at the expense of their first place position. Taking advantage of their underhand tactics, The Late Comers surfed in to land first, but a Protest Meeting chaired by the Race Officer and Sponsor of Team May’s found in favour of the second place crew and a jubilant Team May’s were crowned the Champions. Further protests were overruled by the Race Officer and the prize-giving saw the successful contestants showered with gifts and praise in equal measure.